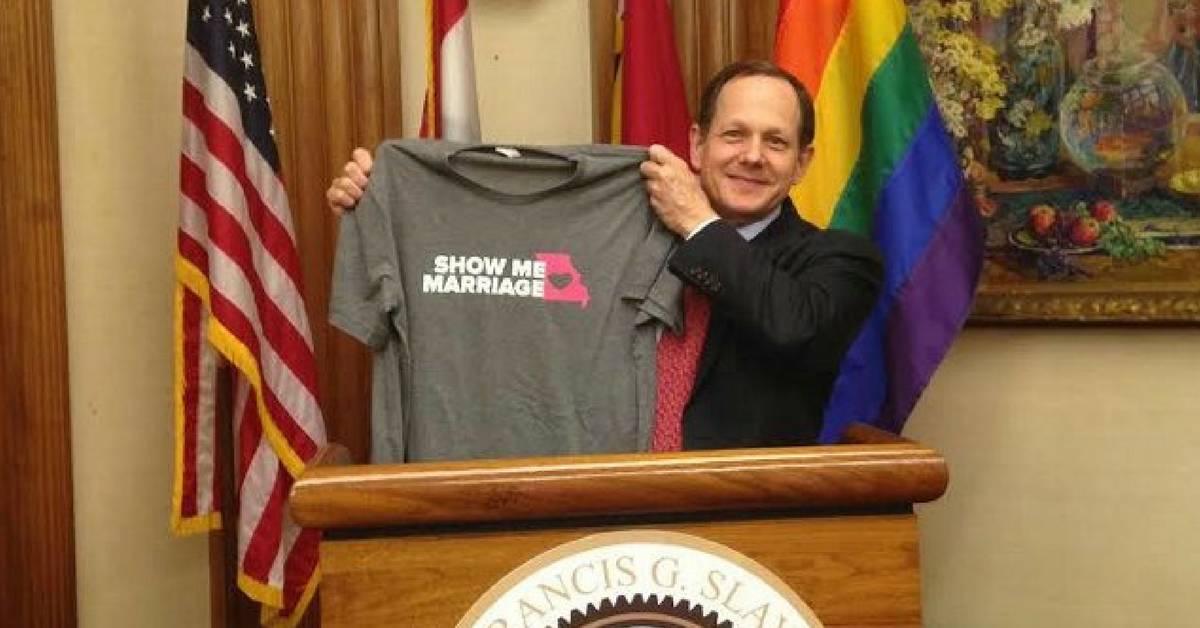 In his sixteen years as mayor, Mayor Francis Slay has shown his true love for St. Louis’ LGBT community. From actively passing pro-LGBT ordinances and policies, to voicing opposition against statewide anti-LGBT bills, to tangibly challenging the state’s ban on marriage equality, and so much more, he has made St. Louis a better place for LGBT people and families to live, work and play. On his last day as Mayor of St. Louis, we want to thank him for his leadership and action to support the LGBT community.

Let’s take a look at just a few of the steps he has taken to support LGBT equality.

In 2001, his first year in office, Slay embarked on the beginning of his journey with the LGBT community serving as Grand Marshal of St. Louis’ PrideFest parade. One of his first initiatives was to establish an Office of Diversity and Inclusion. Since its creation, the office has regularly sought input from leaders in the LGBT community as to how to make St. Louis a safer and healthier place for LGBT citizens.

In 2009, Slay was a vocal proponent of local, statewide, and federal LGBT protections. Together with the St. Louis City Board of Aldermen, Slay passed an ordinance that required LGBT-inclusive nondiscrimination policies for contractors on city projects. He also voiced support for the Matthew Shepard Hate Crime Act that instituted stricter federal hate crime statutes, including sexual orientation and gender identity. Under Slay’s direction and leadership, the City of St. Louis regularly lobbies in Jefferson City in support of the Missouri Nondiscrimination Act and against anti-LGBT bills like SJR 39 and others.

Slay worked again with the Board of Aldermen in 2010 to make St. Louis a more just and inclusive city, signing Board Bill 67 and extending discrimination protections for housing, employment, education, and public services to include gender identity. That same year, noting the importance of having data reflecting the LGBT population, Slay encouraged citizens to “come out” on the census and be counted.

2014 brought Slay to the forefront of national controversy when he directly challenged the state’s ban on same-sex marriage by hosting weddings of four same-sex couples in his City Hall office. That action prompted one of three lawsuits in Missouri challenging the ban on same-sex marriage. Slay also joined the Mayors for the Freedom to Marry coalition.

“St. Louis is a city that doesn’t tolerate discrimination. We are sending a message on what’s right, and I can’t think of anything more right than this.”

While under Slay’s leadership, St. Louis sent a firm message to the state and country in 2016, when it became the 3rd city in the entire country to raise the transgender flag at a government building.

“It’s a message we’re sending that the city is welcoming to everyone regardless of who you love or how you identify yourself.”

In the final months of his tenure, Slay joined the newly established Mayors Against LGBT Discrimination Coalition alongside Mayor Sly James Jr. of Kansas City, Mayor Shelley Welsch of University City, and Mayor Eileen Weir of Independence. The coalition is a bipartisan effort dedicated to promoting and securing inclusive, nondiscrimination protections for all citizens.

St. Louis has regularly been named one of the United States’ most LGBT friendly cities, in part due to leadership from Mayor Slay. Since its conception in 2012, St. Louis has received a perfect score on the HRC’s Municipal Equality Index (MEI).

On behalf of PROMO, I would like to express sincere gratitude to Mayor Slay for all of the important steps that he and his office have taken toward achieving city-wide and statewide equality. Join me in thanking him, by sending a note of thanks.