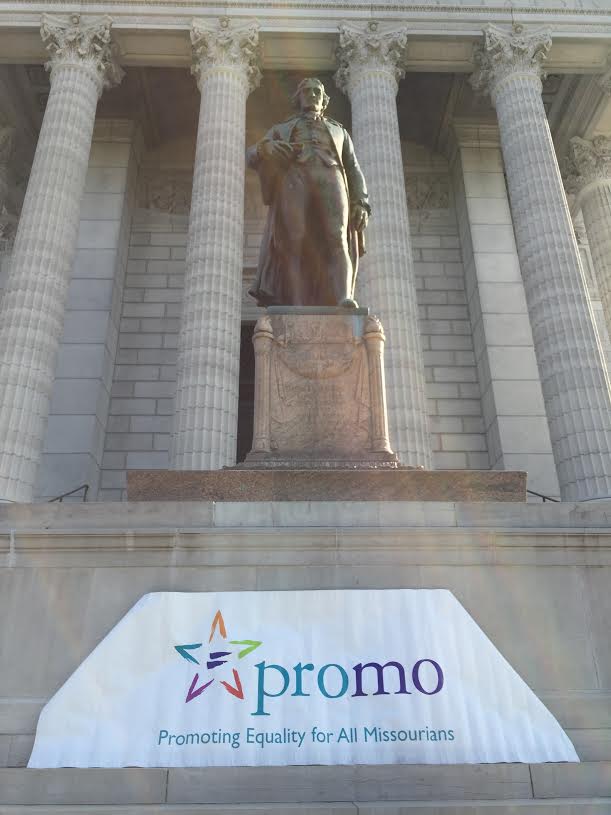 It is that time of year … again. That time after the the start of winter, after the holidays, after the new year, and after everyone goes back to work with new resolutions and goals. It’s that time of year that isn’t on anybody’s radar, but arguably is one of the most important – if you care about affordable healthcare, good roads, and a higher quality of life that is. Yes, the Missouri Legislative session has begun and 197 legislators from all corners of the state will decide the public policy that will intimately affect you and your family.  PROMO will continue our efforts to pass the Missouri Nondiscrimination Act (MONA) which will protect LGBT Missourians from discrimination in employment, housing and public accommodation. In addition, we are fighting to protect LGBT youth from bullying with the Safe Schools Act which will help school districts implement effective and inclusive anti-bullying guidelines.

This year, along with our Executive Director, I will be representing PROMO in the halls of the State Capitol in Jefferson City. Some would say this is an honor and others would say it’s punishment. Realistically it’s probably a little bit of both, but hands down being present at the State Capitol is fundamental to moving LGBT equality forward. In the words of one of my personal heros, Senator Jolie Justus, “if you’re not at the table, you’re on the menu.” That could not be more accurate. Advocating for LGBT Missourians and their families year after year has ensured that anti-LGBT laws did not pass and has moved our efforts gracefully forward because of our work under the dome.

Members of the community have said that I must have a lot of gumption to shake hands with the same folks who helped pass Missouri’s marriage ban and have pushed back on passing basic discrimination protections for gay and transgender people. While gumption it may be, those very people who once passionately fought to curb the LGBT movement in Missouri are now helping us lead it because 15 years ago we shook hands with them and kept shaking hands with them. Our strategy is simple: treat others how you would like to be treated until they can’t find it in their hearts to keep working against you.

We are starting this session strong. More than 600 Missouri businesses have pledged their support for the Missouri Nondiscrimination Act! Our goal for 2015 is to get that number up to 1,000. You can learn more about MONA and the businesses community that supports it at MoWorkplaceEquality.com and MOEqualityBiz.com. February 17 is PROMO’s annual Equality Day at the Capitol where you will have the opportunity to advocate for MONA and the Safe Schools Act. We want the Missouri Legislature to “Show Me Fairness!” I hope you will join us and shake hands with someone who may disagree with you now, but may work alongside you in the future. In the end, the right side of history always wins.