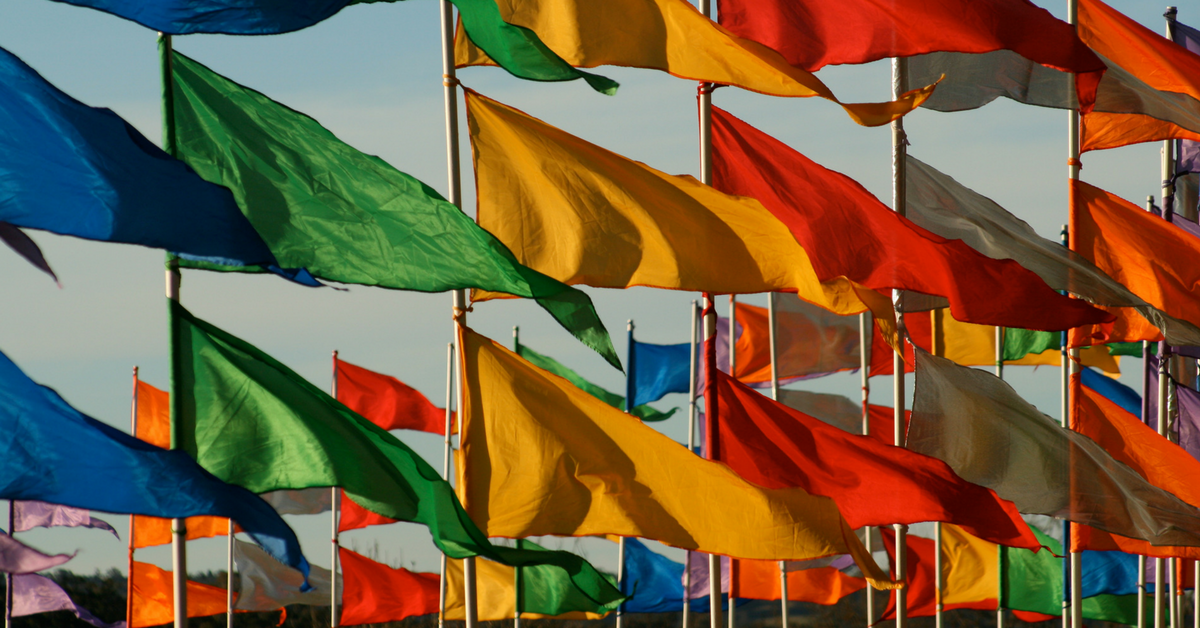 A number of symbols have been adopted and widely used throughout pride festivals since the 1970s in order to represent multiple sexual orientations and gender identities. This Pride season, along with PROMO’s theme of #ShowMeFairness comes the importance in reclaiming the flags. The significance of why LGBT Pride Month began is brought back not only with increased awareness of the Stonewall Riots, but also with reclaiming the flags, the flags that were created under the radical notions of increasing the awareness and presence on the LGBT community, defining what inclusion within society means, as well as creating a symbol that would bring the movement together and would be remembered for decades.

Here are three of the most common flags to keep an eye out for at Pride festivals across the state.

The rainbow flag, one of the first symbols created as a representation of the LGBT community, was first hand-sewn in San Francisco in 1978 by Gilbert Baker. Many activists, including Harvey Milk, the first openly gay man elected to the San Francisco Board of Supervisors, challenged Baker to create a symbol to represent the LGBT community. Baker’s inspiration in creating the rainbow flag was drawn from the Civil Rights Movement, wanting to create a single trademark for the community. The flag first flew in the San Francisco Gay and Lesbian Freedom Day Parade.

Originally, the rainbow pride flag had eight colors, with each color having a distinct meaning in order to reflect the diversity within the LGBT community. Following the assassination of Milk, the the formerly known Gay Freedom Day Committee (renamed the San Francisco LGBT Pride Celebration Committee) chose to fly the rainbow flag to honor Milk, causing the flag to grow in high demand. In response, a seven-colored flag created by Paramount Flag Co. was sold in the Castro District, causing the color pink to be dropped from the flag due to fabric unavailability. Eventually, turquoise was also dropped creating the six-colored rainbow flag used today. Since its creation, the rainbow pride flag has been commonly used as a symbol of liberation through history and is still one of the most easily-recognizable symbols of the LGBT rights movement.

“The flag is an action – it’s more than just the cloth and the stripes. When a person puts the rainbow flag on his car or his house, they’re not just flying a flag. They’re taking action,” Gilbert Baker said.

Prior to the creation of the flag, there were already many symbols used as a representation for the bisexual community, including the inverted pink and blue double triangles, colors that were adopted in order to create the bisexual pride flag.

Page wanted to design a bisxual pride flag, as he did not feel a personal connection the rainbow flag, which by the late nineties, was primarily adopted by gay men and women. Though the rainbow flag was created as a symbol for the LGBT community, Page wanted to produce an additional flag to raise the awareness and visibility of the bisexual community.

Shortly following the creation of the bisexuality pride flag in 1998 was the production of the transgender pride flag in 1999 by Monica Helms, an openly transgender woman. The first time it was flown was in a Pride parade in Phoenix, Arizona in 2000. Most recently, the flag is currently being flown in front of Philadelphia City Hall to commemorate the beginning of the Philadelphia Transgender Health Conference.

“The pattern is such that no matter which way you fly it, it is always correct, signifying us finding correctness in our lives,” Monica Helms said in an interview with the Huffington Post.