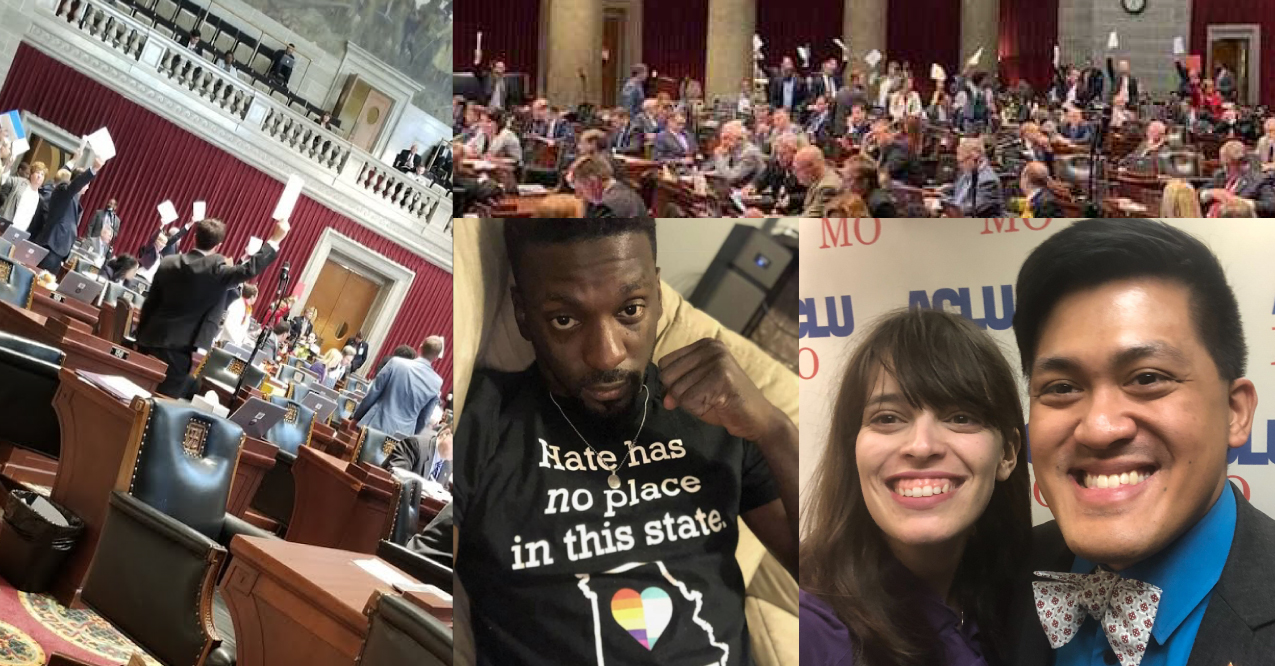 We’ve closed out the 100th Session of the Missouri General Assembly.

It has been an honor to take on this new role at PROMO this session. After starting in January, I packed up some stuff, grabbed my dog, and lived in Jefferson City during the week advocating for our community — for every LGBTQ Missourian. It has been quite a session.

Here are some highlights.

Bills that targeted LGBTQ students on the premise of “religious freedom” were stalled before getting to the floor for debate, thanks to our powerful partnership with the ACLU-MO. Bills that targeted transgender people and students didn’t even make it to committee. And bills that attempted to undermine marriage equality were all defeated.

In the very first week of session, an amendment attempting to bar discrimination against LGBTQ House staff was debated on the House floor. While it was ultimately voted down, it received vocal support from both Democrats and Republicans.

As session progressed, many legislators overtly expressed their frustration at House leadership for not giving MONA time on the House Floor. Representatives like Rep. Kevin Windham called attention to this on the floor during debate.

House Democrats held a press conference specifically to push for the passage of the Missouri Nondiscrimination Act (MONA). Minority Leader Quade stated: “I’m contacted by constituents on a regular basis about MONA and the direct personal impacts they are having…we’re calling attention to the lives of Missourians every single day.”

We made crucial progress in moving the Missouri Nondiscrimination Act forward. For the second year in a row, MONA had a hearing in the House General Laws Committee, featuring favorable, compelling testimony from religious leaders, small and large businesses, unions, and LGBTQ Missourians. Members of the committee asked thoughtful, powerful questions of those who testified, especially to challenge those testify against inclusive protections.

While we are proud of our efforts to work on both sides of the aisle, recognition is due to the House Democrats, who really showed up for our community. Rep. Matt Sain was one of the many representatives who tried to add MONA as an amendment to the bills moving through in the final week of session. At one point last week, nearly every single House Democrat had their hand in the air, waiting to be called on, to offer MONA as an amendment. 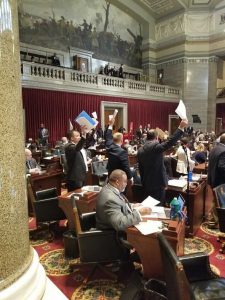 Throughout this session, we are especially grateful to the legislators who shared their own stories of why they support LGBTQ equality, especially Rep. Greg Razer who shared his personal experience of coming out in the small, rural town of Cooter, Missouri.Rep. Razer stated during a debate, “LGBT teenagers are five times more likely to commit suicide than their heterosexual counterparts. Yet what we get from the leadership in this building is silence and inaction.”

Working closely with former colleagues, I helped HIV providers from Washington University in St. Louis educate members of the House of Representatives on modern treatment and science of HIV in order to update our laws that criminalize HIV. A bill that would decriminalize HIV made it to the House floor for debate for the first time in Missouri history.

Rep. Bruce Franks, Jr. announced his resignation from the House of Representatives to focus on his family and mental health. We are beyond grateful for Rep. Franks’ unapologetic support for LGBTQ equality. His presence in the legislature has had a lasting effect on how legislators can and should learn from one another.

For the second year in a row, Rep. Tracy McCreery introduced a bill that would ban the harmful practice of conversion therapy against minors by licensed medical professionals.

To show their support for the Youth Mental Health Preservation Act, both Columbia and St. Louis City passed resolutions this session publicly supporting the bill.

Minority Floor Leader Crystal Quade displayed the transgender pride flag, right alongside the rainbow pride flag, in front of her office for the first time in the Capitol’s history.

I know it is frustrating to watch MONA make progress year after year but not get to the finish line. It is frustrating to me in the Capitol, too. But what I also got to see firsthand in the Capitol this year were the powerful relationships I got to make for our community by being there every day; seeing how many people in the building are working alongside us to finally pass inclusive protections. We are so close.

Next session, we know we will face a new wave of anti-LGBTQ legislation, especially because it is a big election year. We also know that we will be in an even better position to move nondiscrimination forward because of all of our efforts so far in 2019.

Give a gift of $25 today thanking Samati for his consistent efforts working for equality in the Capitol every single day.