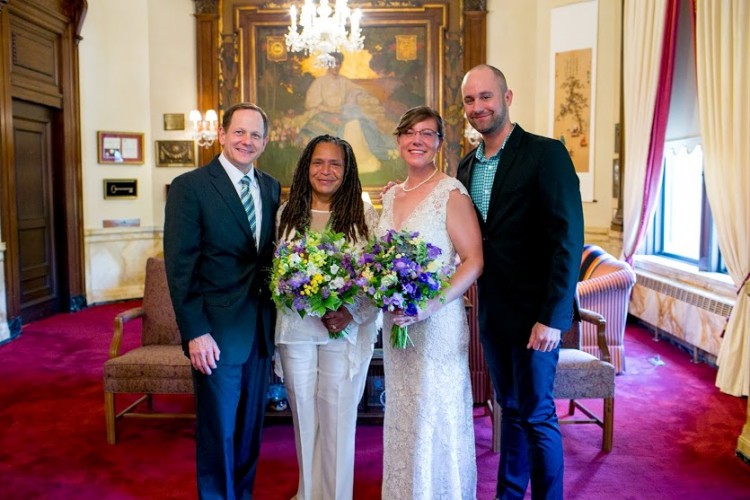 St. Louis Recorder of Deeds, Sharon Carpenter, issued marriage licenses to four St. Louis couples last night. On the one year anniversary of the Defense of Marriage Act being struck down, Mayor Slay announced this morning, June 26, 2014, that weddings were performed at the St. Louis City Hall last night.

Before the ceremonies took place, Mayor Slay stood by the couples and stated, “St. Louis is a city that doesn’t tolerate discrimination. We are sending a message on what’s right, and I can’t think of anything more right than this.”

“As state court after state court has deemed barring couples to marry under the law unconstitutional, it is time to make a stand. It is time to show that the people of St. Louis support equality and will fight for it. This is not a decision I have made lightly, but it is a right that must be defended. St. Louis stands with those who stand for love,” said Sharon Carpenter, Recorder of Deeds for St. Louis City.

Each of the couples are from St. Louis and are in loving and committed relationships. They have all been waiting for Missouri to legally recognize their relationships. After a 39 year engagement, Richard Eaton and John Durnell were the first couple to be married. Then couples Tod Martin and David Gray (together 22 years), Miranda Duschack and Mima Davis (together 4 years), and Bruce Yampolsky and Terry Garrett (together 30 years) were married one by one in Mayor Slay’s office.

PROMO applauds the actions of both Mayor Slay and Recorder Sharon Carpenter. We stand behind the couples and believe marriage should be available to all Missourians. Again and again, we have seen marriage court victories across the country, and public opinion has changed over time, including right here in Missouri. Missouri is ready.

A.J. Bockelman, Executive Director of PROMO added, “I respect what Mayor Slay and Sharon Carpenter have chosen to do today. They swore an oath to uphold not just the Missouri Constitution, but also the United States Constitution. Wave after wave of courts around the country have acknowledged that the bans on same sex marriages are not valid when considered under the constitutional right to equal protection. The courageous people today stand on the right side of history together to say it is time to ‘Show Me Marriage,’ and I am personally and professionally grateful for their stance.”