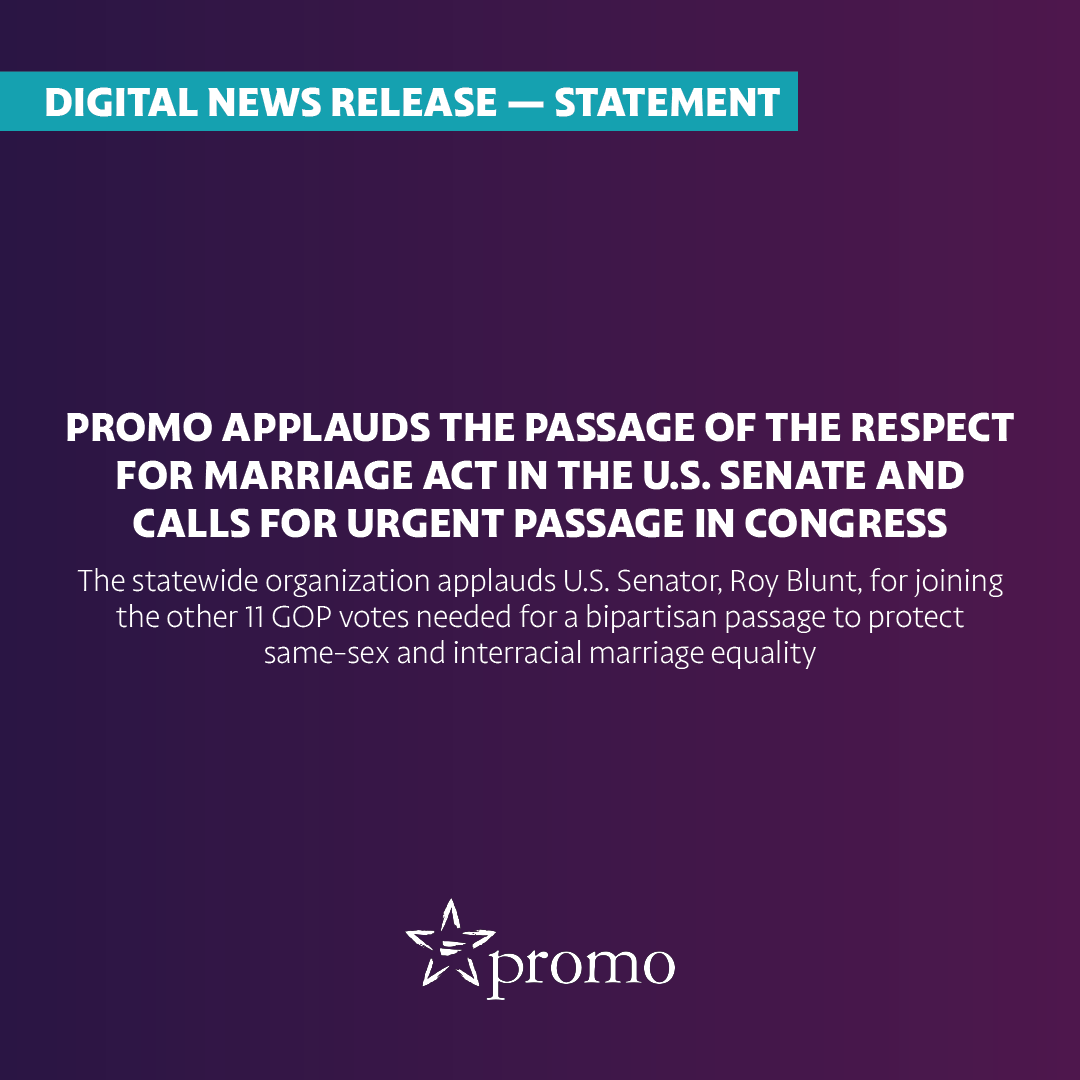 PROMO APPLAUDS THE PASSAGE OF THE RESPECT FOR MARRIAGE ACT IN THE U.S. SENATE AND CALLS FOR URGENT PASSAGE IN CONGRESS

The statewide organization applauds U.S. Senator, Roy Blunt, for joining the other 11 GOP votes needed for a bipartisan passage to protect same-sex and interracial marriage equality

ST. LOUIS (Nov. 29, 2022) — PROMO, the statewide LGBTQ+ public policy and advocacy organization, released a statement today following the passage of the Respect for Marriage Act (RMA) in the U.S. Senate. The organization thanks the show of bipartisan cooperation from Sen. Roy Blunt and now urges Congress to pass this legislation enshrining marriage equality into federal law:

The Respect for Marriage Act is an opportunity to reaffirm the importance of the freedom to marry. LGBTQ+ families deserve stability and respect under federal law throughout all areas of their daily lives. By enshrining marriage equality into federal law, the U.S. government sends a clear sign it considers all married couples to have valid and celebrated marriages allowing them to access all federal benefits no matter what state they live within.

“At PROMO, it is our hope and vision that elected leaders recognize that the human dignity, personal liberty, and bodily autonomy of lesbian, gay, bisexual, transgender, and queer Missourians are not topics for debate, regulation, or restriction,” said Katy Erker-Lynch, Executive Director of PROMO. “The full passage of the Respect for Marriage Act is one step towards full equality for these communities and recognition in a singular message — who we love and how we live harms no one.”

Senator Blunt showed meaningful leadership this week because his vote demonstrates what is possible when leaders come together across the aisle to support common sense bipartisan policy,” continued Erker-Lynch. “We thank him for his vote on a policy that harms no one, yet protects millions. With local support from leaders such as State Rep. Phil Christofanelli and State Sen. Lincoln Hough, among other Republican colleagues, now is the time to pass this bill and make marriage equality the law of the land.”

PROMO celebrates this step forward today; however, we also remind legislators throughout local, state and federal governments it is only just the beginning of what is needed to ensure all LGBTQ+ Americans are liberated from violence, discrimination, and oppression.