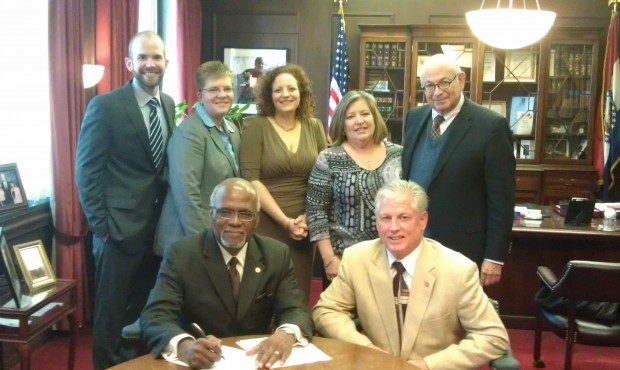 Councilman Pat Dolan said of the ordinance, “This is about protecting individuals who live in St. Louis County. It doesn’t matter what walk of life you come from, what matters is that all citizens regardless of sexual orientation and gender identity are protected from discrimination.”Unfortunately, in most parts of Missouri and several municipalities in St. Louis County, hardworking lesbian, gay, bisexual and transgender citizens are not protected from discrimination in employment, housing and public accommodations simply because of their sexual orientation and gender identity. Across the state, companies can and do legally fire people simply for their sexual orientation or gender identity — reasons that have nothing to do with their job performance. In Missouri alone, one in seven LGBT Missourians have reported experiencing discrimination in the workplace[i].“My vote stands for the proposition that employment, housing and public accommodations decisions should be based on a person’s qualifications, not sexual orientation or gender identity. History shows us that inclusive communities are successful communities where all citizens can share in economic opportunities and where all citizens have the opportunity to reciprocate,” says Councilman Steve Stenger (D), Council District 6, who voted in favor of discrimination protections.A.J. Bockelman, Executive Director for PROMO, Missouri’s LGBT advocacy organization said of the vote, “Tonight’s vote by the St. Louis County Council is a recognition of all the hardworking lesbian, gay, bisexual, and transgender citizens of St. Louis County. Since this issue failed in 2007, PROMO has been actively working to educate St. Louis County citizens and has seen seven local municipalities pass similar ordinances. We know that the LGBT community has always been a part of this region’s growing economic diversity, and we are thankful that the County.”