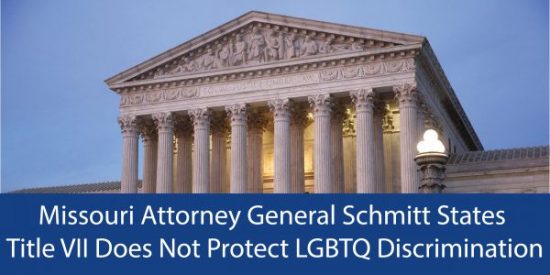 Missouri Attorney General Eric Schmitt signed an Amici Brief urging the Supreme Court to take the position that discrimination based on one’s sexual orientation or gender identity, often attributed in LGBTQ stereotyping, are not protected by Title VII, or Sex Discrimination. Many federal courts and agencies have long said that firing someone for being transgender or because of their sexual orientation is unlawful sex discrimination.

The Supreme Court of the United States is set to hear oral arguments on October 8, 2019 on three cases of sex discrimination. The case, R.G. & G.R. Harris Funeral Homes v. EEOC, Aimee Stephens regards Stephens being fired when she informed the funeral home’s owner that she is transgender and planned to come to work as the woman she is. The owner fired her, claiming it is “unacceptable” for her to appear and behave as a woman. Altitude Express Inc. v. Zardam Donald Zarda, regards a skydiving instructor who was fired from his job because of his sexual orientation. The Second Court of Appeals recognized that when a lesbian, gay, or bisexual person is treated differently because of discomfort or disapproval that they are attracted to people of the same sex, that’s discrimination based on sex. And Bostock v. Clayton County regards Gerald Lynn Bostock who was fired from his job as a county child welfare services coordinator when his employer learned he is gay. In May 2018, the Eleventh Circuit Court of Appeals refused to reconsider a 1979 decision wrongly excluding sexual orientation discrimination from coverage under Title VII’s ban on sex discrimination and denied his appeal.

Steph Perkins, PROMO’s Executive Director, states, “No one should be fired from their job simply because of who they are or who they love. But the harsh reality is that nearly two-thirds of LGBTQ people report having experienced discrimination in their everyday lives. Since Missouri Attorney General Schmitt believes that Title VII does not include protections for LGBTQ Missourians, we look forward to working with him to take action right here in Missouri to ensure hardworking Missourians can’t be fired from their jobs, denied housing, or refused services simply because they are LGBTQ.”

Missouri has a history of Attorneys General taking anti-LGBTQ stances in court cases and then evolving on LGBTQ equality over time. In 2008, then Attorney General Jay Nixon joined other state Attorneys General opposing marriage equality in California. By the time Governor Nixon’s term ended in 2016, he left behind the most pro-LGBTQ legacy in Missouri’s gubernatorial history.