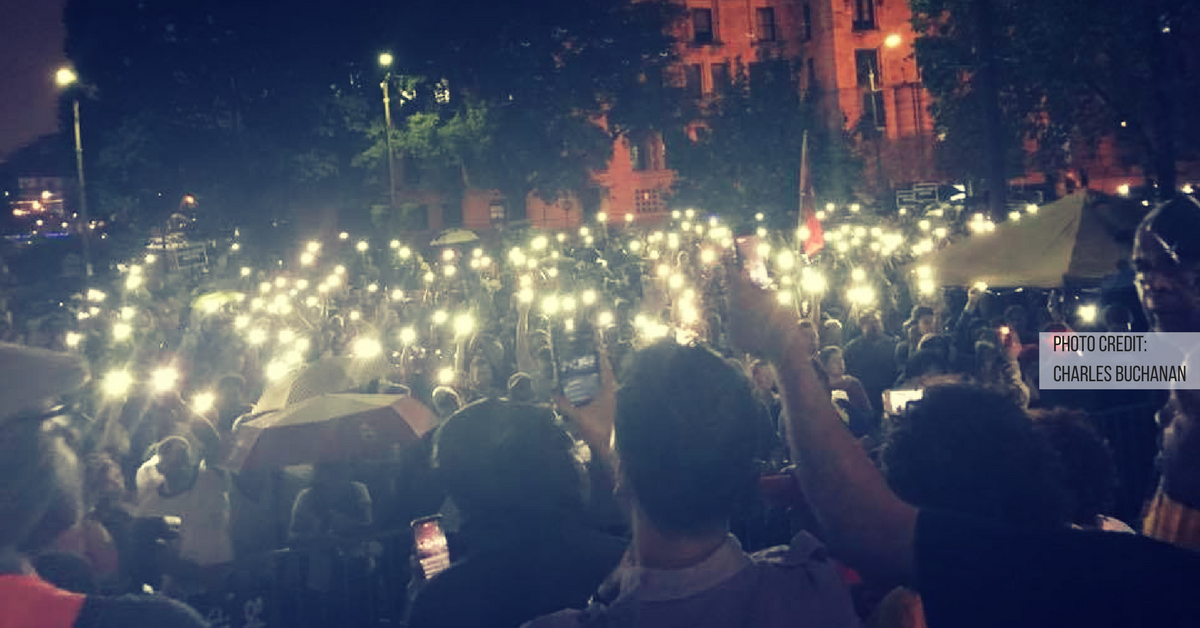 This weekend has been an important past few days in the fight for equality and justice.

This past Friday, former St. Louis Police Officer Jason Stockley was found Not Guilty by a judge for the killing of Anthony Lamar Smith. In response, organized, nonviolent actions began across St. Louis City and St. Louis County, including silent marches, die-ins, school walk-outs, and more. Several of our staff and board have individually participated in or supported these nonviolent organized actions (as seen in video below).

These organized actions have remained nonviolent, intentional, and filled with community, unity, and love, though there have been small numbers of people who have taken their own action outside of these organized spaces. To hear more of the messages directly from organizers and speakers, check out this video of Cori Bush speaking at Taste of St. Louis – Chesterfield, where the organizer of Taste of St. Louis gave them the stage and spoke himself about how he personally wanted to be a part of the solution alongside them.

As an LGBT-focused organization, we look at every issue through an LGBT lens. With so much work to do, we are careful to stay focused on issues that are vital to LGBT equality in Missouri. We are purposeful in our priorities. To PROMO, racial justice, equity, and equality is an LGBT issue.

The LGBTQ community is an incredibly diverse community, with intersections of innumerable identities, including race. LGBT people of color are an integral part of our community. In fact, much of the #BlackLivesMatter movement was started by Black Queer and Trans people. But the reason PROMO sees this is an LGBT issue and why we support the organized actions in St. Louis is so much more than that.

Both the Civil Rights movement and the LGBT movement are rooted in ending oppression. Both movements are based around systems and societies telling us what to do with our bodies and our lives and whether or not we are valuable. We have long expected the Civil Rights movement to stand up for and alongside the movement for LGBT equality. It has been and often remains long overdue for the LGBT movement to do the same in return in a larger way than we ever have before.

We have heard concerns and discomfort from a few of you about whether or not supporting #BlackLivesMatter or many of the actions following the Stockley verdict align with the PROMO mission. We hear your concerns. The LGBT movement is no stranger to protests, sit-ins, marches, escalating tactics, or even riots. And when people are dying, shouldn’t we all be taking action to stop it? And shouldn’t we all be angry?

Let us be clear on one point. We can condemn and mourn the killings of people by police while still supporting police officers. We can still call out violence, oppression, and racism by the police system, individual officers, and our government, and still want to work with law enforcement and decision-makers to create a safe environment for all of us.

As a white led organization, it is even more our responsibility to listen and learn from the people in our communities who are affected by these verdicts and decisions and understand how we are complicit in this oppression and how we contribute, however unintentionally, to racism. We understand that there are many reasons some people cannot attend a protest a march, including transportation, disability, work and family commitments, and more, but there are so many ways for you to be involved right now and in the coming weeks and months.

We will continue to listen to and participate in our communities’ fight for equality and justice, just as we were founded to do.

We hope you will continue to partner with us in this shared commitment to full equality and ending racism and oppression in Missouri. As we are regularly reminded in equality work, even when we disagree in some areas, we can still learn from each other and push each other to be better. If you have any questions about individual actions we are a part of or would like to talk more about our commitment to #BlackLivesMatter or the organized actions following the Stockley verdict, you can contact me directly at Steph@PROMOonline.org or 314-862-4900.